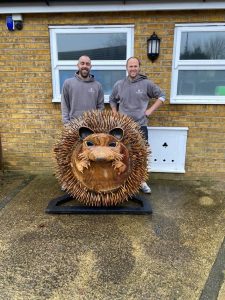 Perhaps it was someone who had forgotten a Valentine’s present for their hedgehog loving partner, or someone thinking he made of valuable metal, but on Sunday 14th February, our giant hedgehog sculpture, Dave, was dragged away from the front of the hotel and into a white van.  Happily, following a hugely successful social media campaign, Dave was discovered two days later in a ditch in nearby Gisleham by local baker extraordinaire, Johnny Spillings of Penny Bun Bakehouse .  He had lost a lot of spikes and was a bit worse for wear, but we hope to have him back out at the front of the hotel by our full re-opening in May.  The perpetrator has not been found https://www.lowestoftjournal.co.uk/news/dave-the-hedgehog-reunited-lowestoft-hotel-7391288 yet, but rest assured he is not valuable to anyone apart for us, emotionally!  The police were (maybe) quoted as saying the thieves were clearly “pricks”.